Back in 2016, a small crowd gathered beneath the blooms of an almond orchard in Chowchilla, California. Their invitation, issued by researchers at the University of California Cooperative Extension, was to “watch a 100,000-pound machine push, grind, and incorporate whole almond trees into the soil.”

Called the IronWolf, the machine looked like something between a rototiller and an army tank. It rolled up to the first tree and pushed it over. In mere minutes, it ground the trunk and then branches into the soil.

Machines like this one—along with regulatory changes and years of research—have tipped the balance in favor of the practice of whole orchard recycling.

The most common way to remove an unproductive orchard was once to burn it. When updates to the Clean Air Act in 2002 placed limits on what and when growers could burn, many began instead uprooting and chipping old trees to sell to electricity cogeneration plants.

Since 2015, most of those fuel-burning plants have shut down as utility companies transition to cleaner sources of energy. But growers still have old orchards to remove—at up to $1,000 an acre, when they're unable to offset the expense by selling chips.

It’s a cost coming due for operations across California, where orchard acreage has more than tripled since the 1990s to exceed 1.3 million acres. Today, the early waves of that expansion are hitting the 25-year-mark at which trees are typically replaced.

All of this, says Brent Holtz, a University of California Cooperative Extension farm advisor in the San Joaquin Valley, has breathed new life into his research on whole orchard recycling. Even growers who found the idea interesting dismissed it as impractical so long as cogeneration plants paid for their old trees. But balance sheets are being rewritten: this winter, the California Department of Food and Agriculture included whole orchard recycling in its Healthy Soils Incentive grant program, offering up to $800 per acre for soil improvements.

And in April, Holtz’s research team at University of California Davis published the first known peer-reviewed paper on whole orchard recycling, demonstrating that the practice is both climate-smart and beneficial for growers. Their results, based on 10 years of study, found that on every measurement of soil health, crop performance, carbon sequestration, and more, almond orchards grown in the decomposing chips of their predecessors far outperform orchards planted after a burn. 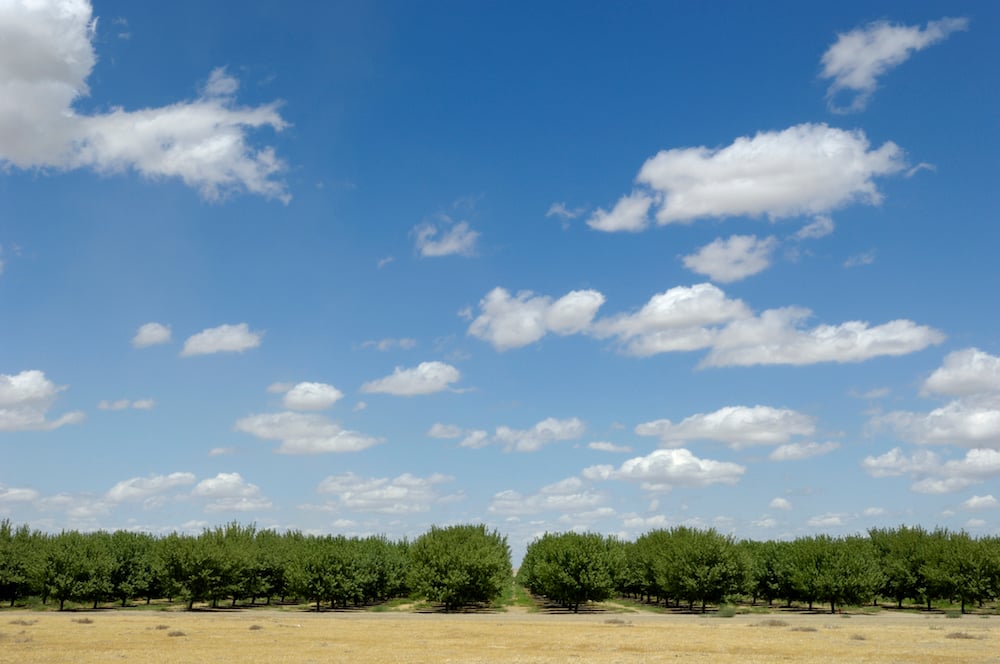 Holtz's findings challenge old assumptions that adding so much new carbon to the soil would limit available nitrogen and stunt tree growth. He found that in fact this effect does not last long, and can be mitigated in early years with supplemental nitrogen applications—an area where his research is ongoing.

Furthermore, the study concluded that the long-term benefits of whole orchard recycling far outweigh the costs of a year or two of more careful nitrogen management. In trial orchards planted in 2009, researchers consistently saw higher kernel yields beginning in year five. Over the full ten years of the study, accumulated yields were 15 percent higher in plots planted over the grind treatment than in those planted over a burn.

Microbial activity, soil fertility, and soil moisture retention were significantly higher, too: water-use efficiency was 20 percent higher, and after testing deficit irrigation in both plots, researchers noted that trees in the recycled plots “were significantly less water stressed” at the end of the irrigation period. In terms of climate-change mitigation, Holtz notes that benefits may fall off as chips continue to break down—but over the course of the study period, carbon was successfully stored at a rate of five tons per hectare.

'Everything's starting to come together'

“It’s a practice that’s going to benefit the next generation of orchards and it’s going to improve soil quality,” Holtz says. “And now growers can actually get some money for it from CDFA, so everything’s starting to come together.”

“We’ve known for thousands of years that organic matter is good for our soil,” Holtz adds. Compost has long been part of maintaining healthy crops. “But we didn’t have machines, we couldn’t grind up whole trees before. Now we can.”