To deter unwanted birds, sustainable vineyards call in the falconers

The earliest tasters arrive at the onset of veraison.

As grapes sweeten and soften, full flocks descend: hundreds, then thousands of starlings, house finches, blackbirds, jays, and sparrows. Some species, like the starlings, pluck their choice of berries and carry them off to eat. Others prefer their grapes on the vine, pecking at pulp and seeds from one and sometimes damaging the whole cluster in the process.

On the ground, wild turkeys can consume the equivalent of a full bottle of wine in a single day. Pest birds even become connoisseurs, preferring some varietals over others. (Their favorite? Pinot noir, followed by Chardonnay.)

The damage goes beyond yield loss. Pecked grapes can harbor bacterial and fungal pathogens such as botrytis, or bunch rot, that leads to color changes and off-flavors and textures. The wounds attract insects, which further damage the crop.

Vineyards choose from a range of abatement measures. Chemical and auditory repellants, balloons, kites, and netting are all used with some success, but each has its drawbacks. Over time, birds acclimate to loud air cannons and static scare tactics, realizing they pose no real threat. Chemicals fail some growers’ sustainability standards. Netting is effective but costly and labor-intensive—and can also restrict air circulation, trapping moisture close to vines and promoting mildew.

If a vineyard needs to be efficient, economical, and environmentally friendly—all at once—what’s left in the arsenal of weapons against birds?

The use of falconry for bird abatement in vineyards harnesses the power of instinct in both predator and prey. The mere sight of a raptor or its shadow triggers smaller birds to flee or find cover. Unlike methods that rely on mimicry—recorded calls, balloons painted with eyes, kites with a raptor’s silhouette—prey species don’t grow complacent about the real thing. And no wonder: raptors are ferocious hunters that can see up to eight times better than a human, spot prey from more than 100 feet in the air, and dive at more than 200 miles an hour.

Falconry is highly regulated: individual permits are needed to keep falcons used for hunting, abatement, or education. Falconers need at least seven years of experience before they’re allowed to perform bird abatement, and with a well-cared-for raptor living up to 20 years, the profession can be a lifelong commitment.

Master falconer Jana Barkley is among those who’ve made that commitment. Her feathered colleagues include a Lanner falcon named Aero—namesake of Barkley’s business, Aero Falconry—and a pair of Harris hawks called Serenity and Cowboy.

On a vineyard assignment, Barkley’s day begins by weighing each of her birds to calculate the amount of food they’ll need to maintain their ideal weight and fly well. For a large client such as Wente Vineyards, she’ll live on-site in a trailer during harvest season. She flies each bird several times a day for 5 to 15 minutes at a time.

“The falcons hover above me. As I swing the lure, the falcon dives—we basically play a game of keep-away.”  Eventually allowed to catch the lure, the falcon is then rewarded with food. The sight of the predator flying and hovering triggers pest flocks to take off. Barkley’s other animal coworker—a English Pointer she calls Doc Holliday—then runs through the vineyard flushing out birds hiding in the vines.

Though referred to as “falconers,” professionals like Barkley work with a variety of predatory birds, each with its own strengths. Falcons are built for speed and capture their prey in the air. Hawks are larger and have broader wings than falcons, but maneuver through trees with skill to knock prey to the ground.

Rebecca Rosen, owner of Authentic Abatement, describes the difference in dog-lovers' terms. “The hawks are very direct in their work, more like a Labrador retriever pointing birds, while falcons are more similar to border collies—able to influence large numbers of animals at once."

Working for vineyards spread over several locations, Rosen says the falcons can learn to identify the different sites and rid them of pest birds without her assistance. “I’ve been working one vineyard for years, with plots spread over several miles. One of my falcons will go over each of those locations then come bulleting back to me once he’s finished.” 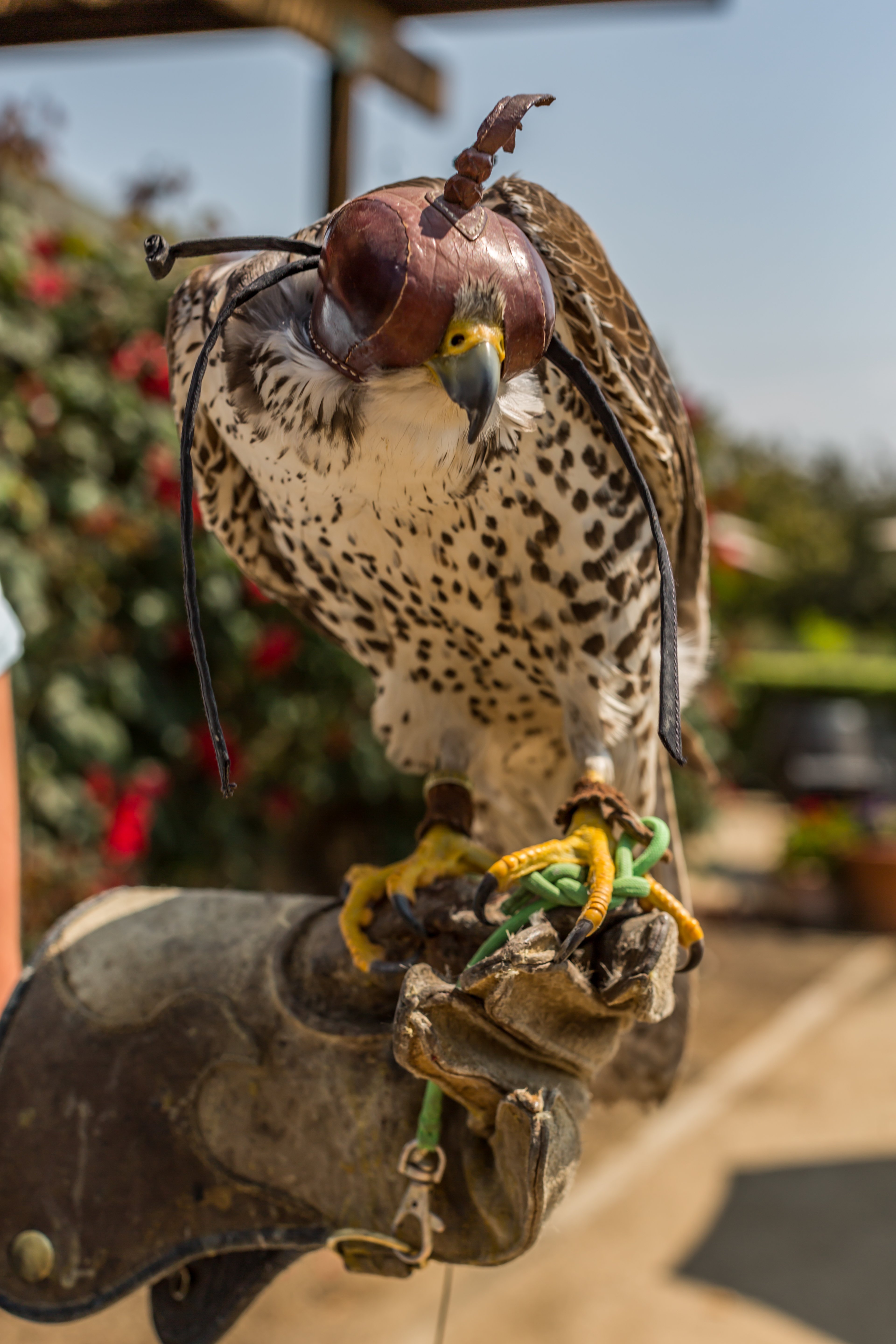 Their skill and range make falcons Rosen’s preferred bird for vineyard work—but hawks have a role, too. “Falcons easily cover larger areas. Hawks will pursue birds into brush, so if I have tree cover bordering vineyards I do fly Harris hawks,” Rosen says. She notes that pest birds do the most damage on vineyard edges close to natural habitat. “Habitat management is one area I discuss with my client, since the area surrounding vineyards influences the numbers and species of pest birds attracted to the vineyard.”

A falconers’ choice of what to fly may come down to the individual bird—its personality, level of experience, and skill at avoiding hazards that may include vehicles, wires, and even wild raptors. Each working bird is fitted with a GPS unit so they can be retrieved if they go astray. 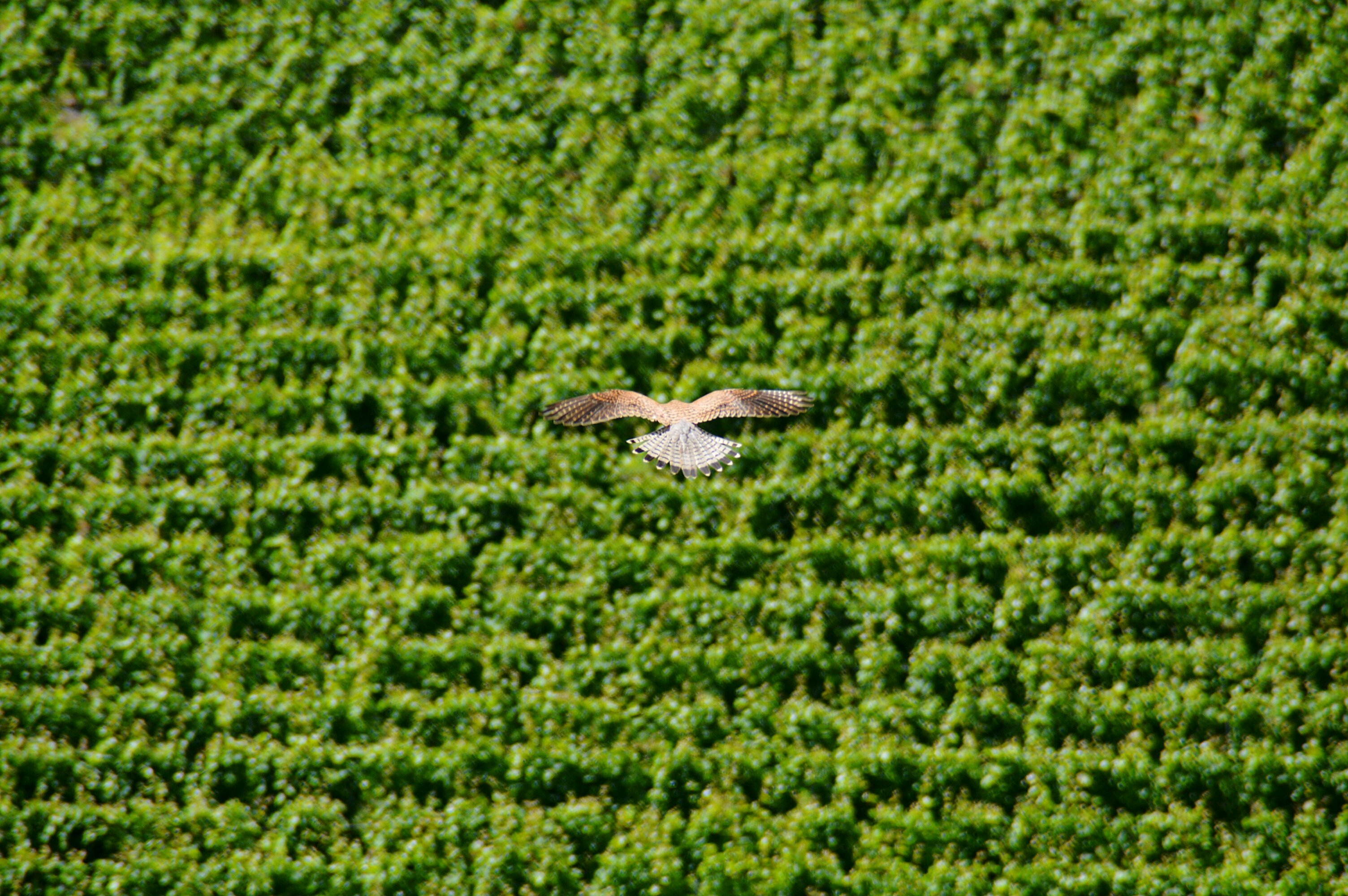 “Flying the younger raptors can require more work,” says Jana Barkley. “Some of my birds have more of a presence, are more threatening, others are more laid back. The pest birds can read the difference. In small areas or vineyards closer to roads or power lines, I fly the raptors that tend to stay closer.”

No harm, no foul

The falconers’ attention to detail pays dividends for their vineyard clients.

“The falconers and falcons do an excellent job of reducing bird damage,” says Kari Flores, farming operations manager at Robert Sinskey Vineyards in Napa Valley. For years, the sustainability-focused operation used bird netting to protect the crop, but Flores wasn’t satisfied with the approach. “I would find hummingbirds, dragonflies, and other non-target wildlife caught in the netting,” she recalls, “and the netting needed to be removed and replaced each time samples were taken near harvest. Falcons make life easier, are more effective than other methods, and cost half as much as the netting.”

Before Rosen and her raptors started working for Bouchaine Vineyards in 2015, thousands of pest birds lined adjacent telephone wires before harvest, waiting for a chance at the ripening grapes. Nowadays, the flocks are much smaller.

“After a few visits, the birds associate Rebecca’s vehicle with the falcons, leaving the vineyard before the falcons are even out of the SUV,” says Chris Kajani, the vineyard’s winemaker and general manager.

More than other abatement methods, falconry meets both vineyards’ need to protect the bottom line and their desire to tread lightly, effectively deterring nuisance birds without causing them permanent harm. For Kajani, striking that balance makes vineyard falconry—however exotic it might sound at first—a natural choice.

“We live and breathe grapes and wine, but we also live on this dirt, breathe this air, and drink this water. We’re dedicated to leaving a gentle imprint so that this land can be enjoyed for generations.”