The potato is naturally water-efficient, producing more calories per liter of water than most crops. Regardless of the end market goal—whether it be restaurants or retail—maintaining consistent soil moisture throughout the growing season is a key factor in producing a uniform, high-quality crop.

Many farm managers are aiming for at least 75 percent of the crop to meet retailers’ highest standards. To achieve this, they'll need to walk a thin line between over-watering and under-watering.

When more water is applied than the crop needs and the soil can absorb, the result is a lack of oxygen for root respiration. This slows plant growth, increases the likelihood of rot, and can be highly detrimental to yield and quality. Early in the season, over-watering can result in misshapen tubers. Later in the season, it increases the likelihood of powdery scab and lenticel growth.

"Applying too much water to crops can be just as detrimental as not enough," says Andrew Francis, Senior Farm Manager at Elveden Farms. He points out that the risks extend beyond the crop to poorly drained soil. "As well as risking crop damage such as cracking, there can be environmental impacts such as run-off and wasted resources."

Though most growers are aware of these risks, they may overwater from fear of common scab, or unintentionally due to poor distribution of water from equipment. Even small fluctuations in soil moisture status within the ridge can lead to uneven tuber bulking, malformed tubers and growth cracks. For this reason, when using drip irrigation systems, the tape should be placed in the top of the ridge.

Of course, under-watering potatoes needs to be avoided as well. In the heat of summer, under-watering causes wilt. Though wilt can be apparent during a visual inspection, growers managing large farms with varying soil types may find it easy to miss—especially when the plants are immature.

In addition to keeping irrigation equipment in good working order, canopy management is also critical to maximizing water efficiency and avoiding under-watering. Growers in hot environments need to establish quick canopy closure to minimize water loss due to evaporation from the soil surface. 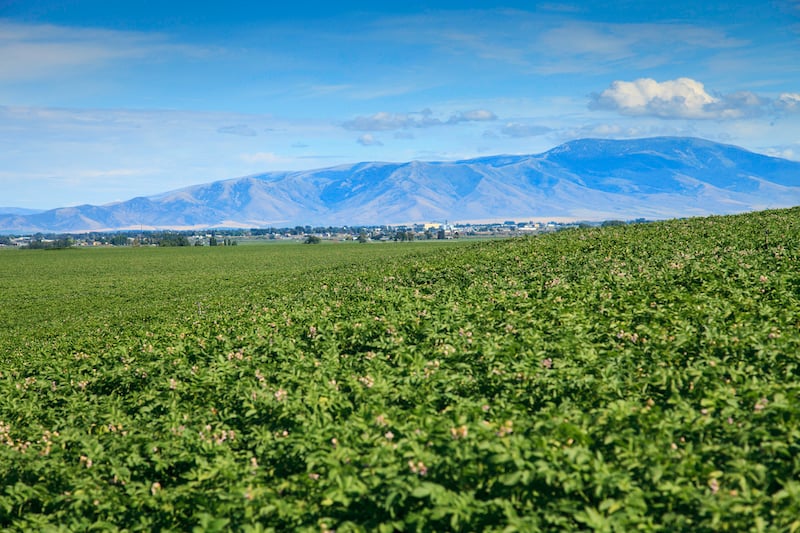 Research has shown that final irrigation can be used to reduce bruising during the harvesting process, so if soil is dry, a final irrigation should be applied at least one week prior to raise the soil moisture and the tuber hydration level.

NDSU extension experts advise, "On sandy soils, soil moisture content between 60% and 80% of field capacity (40% to 20% moisture depletion) provides conditions for a desirable soil load into the harvester, with optimum separation of potatoes and soil and a minimum of physical tuber damage."

Research on potatoes from North Dakota State University has shown that more frequent watering in smaller amounts is the most beneficial form of irrigation for potatoes. “We are seeing more variable rate application (VRA) going on with center pivots, and it is trickling in slowly on more acres," says Andy Robinson, NDSU associate professor and potato agronomist. "With more growers being able to use that technology, we should see a more consistent yield."

Irrigation equipment manufacturers have also made progress on features that provide more sophisticated control of pivot revolutions, allowing for faster and lighter applications that can be used to lower the temperature of the crops, reduce erosion, and improve uniformity.

Even for growers not yet ready to upgrade irrigation systems or adopt a full-fledged VRA approach, modern aerial imagery provides an efficient route to avoiding over-watering and under-watering. Precise water stress data from Ceres Imaging offers the ability to evaluate the status of the crop at a glance, strategize uniformity improvements, and quickly identify and correct irrigation issues invisible to the naked eye. To learn more, contact us.