In June, the California Air Resources Board (CARB) held a nine-hour public hearing on a proposal that would require that all new passenger cars, trucks, and SUVs sold in California emit zero emissions by 2035.

The two-pronged approach outlined in “Advanced Clean Cars II” mandates a growing number of battery-powered, hydrogen fuel cell, and plug-in hybrid electric vehicles (EVs), along with increasingly stringent rules for gasoline cars and trucks. As the rule-making process moves forward, many are wondering how it might impact agricultural production in the state. Questions remain about when, and how EVs might be incorporated into agriculture. What will the future of electric farm vehicles look like?

During the recent CARB hearing, some agriculture stakeholders raised concerns about the current lack of electrical vehicle infrastructure and the agency’s proposed regulatory compliance timeline. Farm groups have questions about whether the state’s electrical grid can keep up with extra demand. “Without a massive investment in rural California, we will be left quite literally in the dark,” said Katie Little, a policy advocate for the California Farm Bureau Federation.

Beyond the direct impacts on the farm, California’s zero emission rules also have far-reaching implications because trucking is such a crucial part of the farm and food supply chain. A December 2020 report by the U.S. Department of Agriculture (USDA) found that trucks account for 83% of agricultural freight movements by tonnage and 88% by market value.

Adopted in June 2020, California’s Advanced Clean Trucks regulation requires manufacturers to sell an increasing percentage of zero-emission heavy-duty trucks by Model Year 2024. For medium- and heavy-duty trucks, CARB aims to achieve a zero-emission truck and bus fleet by 2045. In 2020, a coalition of 15 states and Washington, D.C. announced the intent to pursue similar rules for trucks. Agriculture industry leaders in California are at the forefront of the conversation about EVs. While large electric tractors and other heavy-duty equipment are not commercially available yet, as battery performance improves, the technology will catch up for larger machines. In 2021, British market research firm IDTechEx predicted the market for EVs in agriculture, construction, and mining could grow to $100 billion annually.

EV manufacturers hope to convince American farmers to make the switch to electric vehicles. Ford Pro is introducing a new line of electric pickup trucks with the goal of 100 percent “uptime,” meaning no time lost while in the shop. Wilbur-Ellis recently announced plans to integrate 10 of the new electric trucks into its fleet in Sonoma and the Salinas Valley. 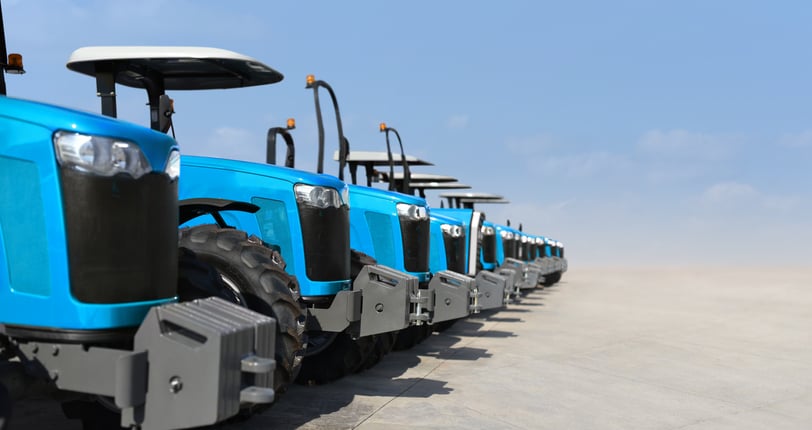 Another example is the Monarch tractor, a 75-horsepower electric smart tractor manufactured in Livermore. A two-wheel-drive version sells for $58,000, and is meant to compete with conventional tractors purchased for closer to $90,000. In 2021, USDA Conservation Innovation Grant funding was awarded to an Oregon farm to integrate and test Monarch’s autonomous electric tractor.

Unlike the pressure that the automotive industry has experienced, so far there has not been a massive push from government regulators to transition toward electric farm machinery. However, some policymakers are looking for ways to help rural America embrace EVs.

In January 2022, the House Agriculture Committee held a hearing with an important message: don’t leave rural America behind in the push for vehicle electrification. The hearing highlighted today’s challenges, including the limited charging stations available in remote areas and that the majority of electric vehicle options today are not farm-ready.

The Biden administration supports the switch to electric vehicles as a way to work toward its climate goals. As policies and incentives to invest in EV technology accelerate, USDA Rural Development Community Programs aim to play a proactive role in supporting charging infrastructure and electric vehicle adoption in rural America. Loan financing through USDA is also available to help producers install energy efficient equipment and systems for agricultural production or processing.

CARB collected public comments on the “Advanced Clean Cars II”  proposal until May 31, 2022. It will hold the second of two public hearings sometime in August 2022. You can subscribe to CARB’s listserv to receive updates.

California has been on the front lines of the debate over motor vehicle emissions since the 1960s. Today, other states are closely watching what happens next and preparing to take actions of their own. Almost two dozen governors discussed electric or alternative fuel vehicles in their State of the State speeches in 2022.

Growers can act now to reduce carbon emissions by conserving water, minimizing inputs, and promoting soil health. And some farmers are already moving toward EVs. As the general manager of the San Joaquin Valley’s Terranova Ranch put it: “We know that our future is going to be electric. We are investing money in it now, so that we can be ready for the future.”

Insects that can make money for almond growers