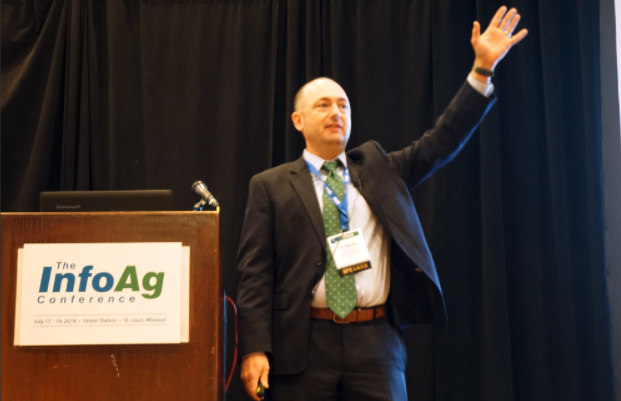 What’s the difference between accuracy and precision?

It might not seem like a big deal outside of a spelling bee, but to Joshua McGrath, an extension specialist in agricultural soil management at the University of Kentucky, it’s a huge deal.

McGrath spoke to precision agriculture professionals in St. Louis about accurate and precise agriculture, and how to implement variable rate phosphorous application.

The goals for variable rate phosphorus differ depending on crop and region, he told the crowd.“It’s not just about whether we’ll get more yield,” he said. “In the context of four R’s that we spend a lot of time talking about, performance objectives are important.”

How so? The right rate is different for different crops, meaning phosphorous is helpful to potatoes in much smaller quantities than for corn and soy.

“Traditionally what limits our ability to make a recommendation is good samples,” McGrath said.

It’s no simple task, he said, because soil testing is actually four separate activities—soil sampling, soil analysis, and interpretation of results and recommendations.

“The reality of the situation is 70% of the time we’re doing some form of grid sampling and interpolating (to fill in gaps),” McGrath said. “On average, our recommendations are correct for phosphorus. But it’s probably the wrong rate in most places in the field most years.”

That’s where accuracy versus precision is a key distinction, he said.

Variable rate applications can be accurate, but also be imprecise.“You can’t sample on a zone basis and then interpolate it like it was grid sampling,” he told the audience.

The required sampling intensity is every quarter acre or so, about 20 meters apart, he said.At a small scale, soil properties tend to be stochastic, according to McGrath—they are random such that they can be predicted accurately but not necessarily precisely.“You have to be sampling pretty intensively to interpolate a soil map,” he said.

“If at the end of my career, I was right 40% of the time, I was the best soil scientist ever,” he told the crowd. “Our current level of technology allows us to do accurate ag—we literally can’t do precision ag.”

McGrath said that In 2018, the precision ag industry continues to double down and pour more money into empirical relationships.

He told the crowd the industry should get back to the basics: to dig up old data and figure out what sufficiency recommendations are for precision agriculture.

“Even with a decent soil test map, our recommendations are coarse,” McGrath said. “You need to recognize that.”