In its latest Census of Agriculture, the USDA reported a 150 percent increase in farms with photovoltaic solar panels—from 36,000 in 2012 to 90,000 in 2017. What’s behind the growth of solar technology on American farms? And what do growers need to know when they’re weighing whether to go solar?

Growers cite a range of reasons for making the switch, says Damon Silva, vice president of business development at CalCom Energy, a California solar development company with an extensive portfolio of agribusiness customers. “Some buyers are willing to pay a premium for your product if their suppliers have gone renewable,” Silva says. Solar energy is increasingly appealing as extreme weather wreaks havoc on electrical grids, like last winter’s storm that knocked out power to 10 million Texans. “But for the most part, farmers are looking for cost savings,” Silva says.

Commercial solar developers like CalCom work closely with growers to size a solar array that’s big enough to meet about 95% of the operation’s electricity needs while the sun is shining—meaning that system owners don’t have to purchase that power from the utility. Moreover, most states employ a solar incentive policy known as “net metering,” which allows solar customers to sell excess power back to the utility company at the retail rate, further offsetting their electricity costs.

For growers who rely on irrigation, energy is a major expense. In 2018, the USDA reported that U.S. farmers spent nearly $2.5 billion just to power irrigation pumps. Nationwide, the USDA reports that farmers devote an average of 6% of their operating budgets to energy. But that percentage is more than twice as high—between 12 and 16 percent of total costs—for water-intensive crops like cotton and rice. And in California, irrigation accounts for nearly 70% of farm electricity use, according to a report from solar developer Revel Energy. 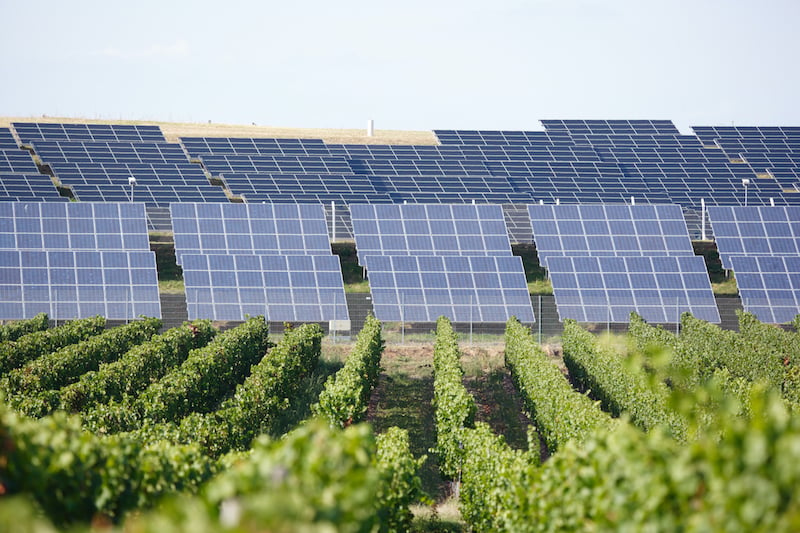 What's more, growers often pay higher electricity rates than other commercial customers. Because many utilities charge more for power when demand is high—and crops' water needs increase when temperatures climb—farms' biggest energy needs often occur when rates are highest. The National Rural Electric Cooperate Association estimates that energy rates will increase 17 percent for irrigation growers between 2020 and 2030, in part due to this “peak nature” of demand.

Given these costs, solar is an attractive proposition for many agricultural operations. Although farms, orchards, and vineyards  may need to be a little bit more diligent than other customers about keeping solar panels clean—heavy dust build-up on the panel surfaces can reduce the system’s generation capacity—maintenance needs are generally minimal. The USDA reports that solar systems are cheap to maintain, typically needing only an annual inspection by a solar contractor.

As the cost of purchasing electricity from the utility has climbed, the price of solar technology has dropped. In addition, many farmers are eligible for government and utility programs incentivizing energy efficiency, sustainability, and independence.

Since 2002, the federal Renewable Energy for America Program has provided loan financing and grants to more than 10,000 agricultural producers for renewable energy systems and efficiency upgrades. Growers may also be able to take advantage of state-level incentives: check out the Database of State Incentives for Renewable Energy for the latest information about solar programs near you.

The most important federal solar incentive is the federal solar investment tax credit, which currently allows solar customers to write off more than a quarter of the cost of their system’s installation. However, the solar tax credit is currently scheduled to drop to 22% in 2023, and then fall to 10% for commercial customers the following year—a deadline to keep in mind if you’re currently considering investing in solar. 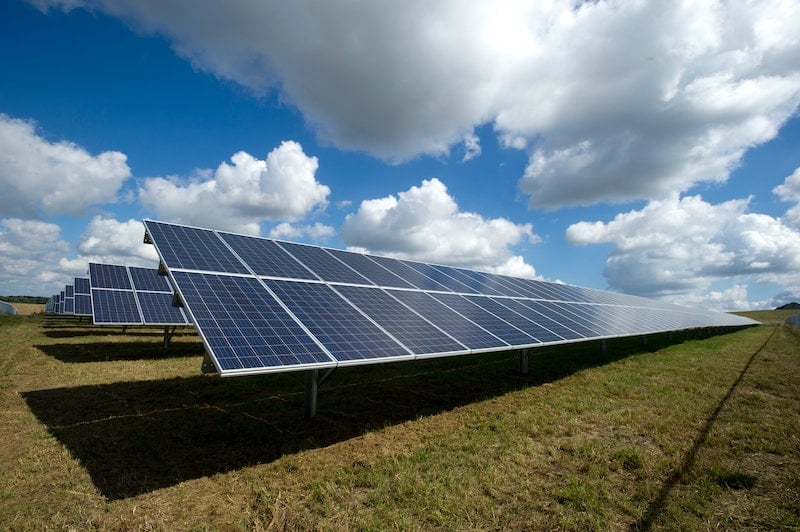 Prospective buyers in California should also keep an eye on proposed changes to the state's net metering policy, which would reduce the rates that utilities must pay solar customers for this excess power. The final decision on the policy is due in late January, and could change the current financing models that put solar within reach for many customers.

For now, though, between energy cost savings and incentive programs, Silva says his typical customers are currently recouping their investments in about four years—and paying significantly lower electricity bills for the remaining 20 to 30 years of their system’s lifespan.

Purchasing a system is only one way that growers are finding ways to take advantage of solar technology. According to SunPower, many commercial solar developers lease solar equipment to farmers, charging a fee for use of the equipment but keeping upfront costs low, while still enabling the landowner to offset their energy costs.

Other growers choose to enter power purchase agreements, in which farmers lease their land to utility-scale solar developers, who build large systems and sell that solar power to grid operators. Silva says more and more growers are choosing this option, especially in regions like California where drought and groundwater regulations have forced farmers to fallow some of their acreage. “They’re thinking, ‘Well, what else can I do with this land I can’t farm?’” says Silva. “If they can arrange a long-term lease with a solar developer, they can get some guaranteed income for 25 or 30 years.” 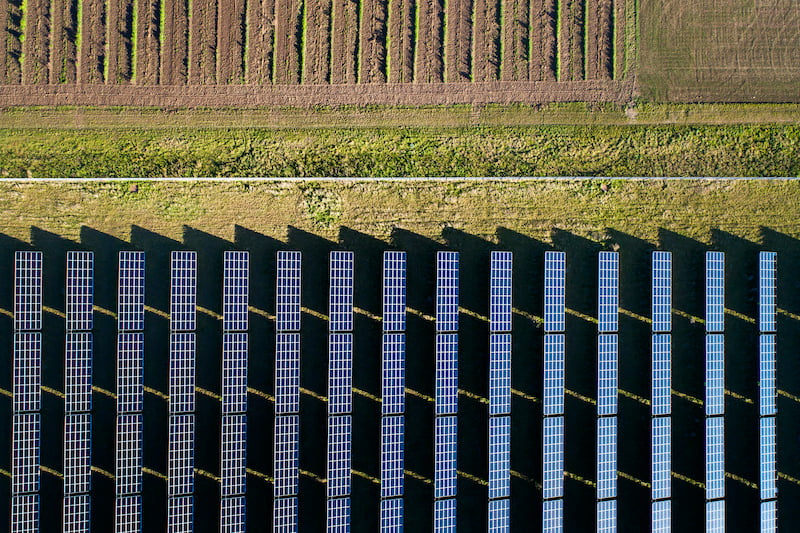 Power purchase agreements have sparked a backlash in some rural communities. The National Renewable Energy Laboratory estimates that utility-scale solar development could grow to 2 million acres in the U.S. by 2030. “It is productive farmland in many cases that is converted to solar property,” said Gary Joiner with the Texas Farm Bureau in the Financial Times. “And that agricultural value is lost to those that are working the land.”

“A lot of solar installers leave big ruts, grade the land, throw gravel down, just fully destroy the ecosystem underground,” says Byron Kominek, a third-generation farmer and solar system owner. “It’s often done in a way that takes the land out of any useful production whatsoever, even beyond the life of the lease.”

Having said that, Kominek himself has proven an alternative approach. He installed a 1.2 megawatt solar array on his family’s farm near Boulder, Colorado, working with contractors to design a system with elevated panels spaced just far enough apart to be able to maneuver a tractor between them. Today, Kominek grows vegetables that do well in the partial shade of his panels.

Kominek's farm, Jack’s Solar Garden, is also a research site for the nascent field of agrivoltaics—the co-location of solar panels and shade-tolerant crops. Researchers experimenting with agrivoltaics methods at the University of Arizona were able to cut water consumption while coaxing double the tomatoes and triple the chili peppers from plants growing under solar panels, all while offsetting energy costs by selling power to the grid.

If you’re weighing whether solar energy makes sense for your business, “that hesitancy is fully justified,” says Kominek. “But with better regulations, and a better understanding of how our land can be used for crops and solar, it shouldn’t be an automatic ‘No.’”

China's soybean tariffs: Experts weigh in on what it means for growers

As regulations change, evaluate your alternatives to agricultural burning