$2.1 billion. That’s the value in exports that California farmers lost between May and September of 2021 due to gridlock at West Coast ports according to recent analysis by UC Davis. That's an economic hit that surpasses even the losses from the 2018 U.S.-China trade war. 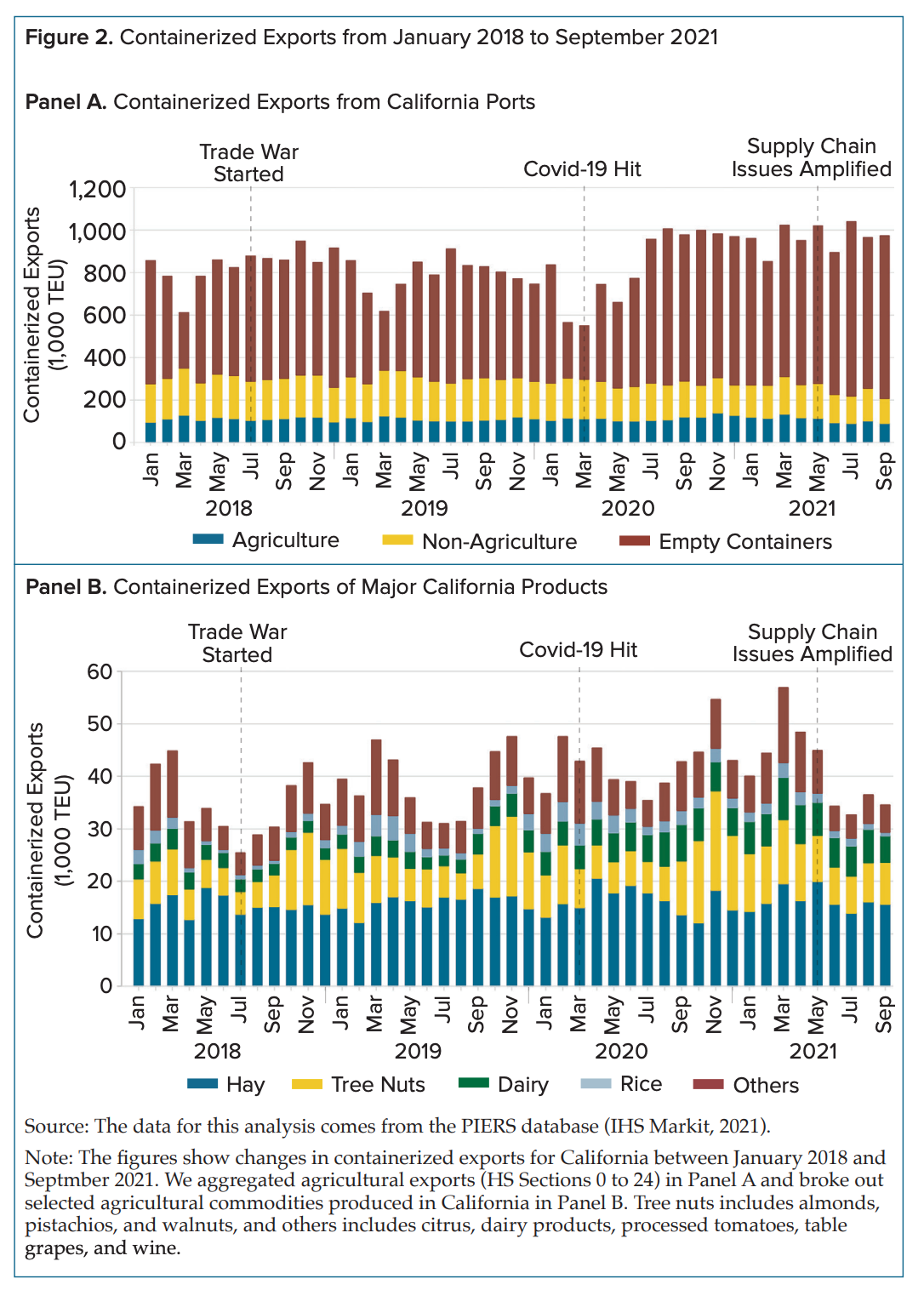 California’s ports are a major gateway for agricultural trade—but they are also among the least efficient in the world. The annual Container Port Performance Index by the World Bank ranked all three major California ports far below most ports in developing countries and those on the East Coast.

Surging U.S. consumer demand for imported goods has increased the need for cargo containers, putting further strain on West Coast shipping hubs like the Port of Oakland. Ocean carriers have been rushing empty containers back overseas rather than waiting for export goods to be loaded. During the third quarter of 2021, 71% of exported containers from California were empty, according to the American Farm Bureau Federation.

The current crisis underscores a long-standing challenge facing American agriculture: our aging infrastructure threatens the bottom lines of farmers and ranchers who rely on foreign markets to sell their products.

"I think the most important takeaway from our findings is that lack of investment and infrastructure on our transportation system is now costing ranchers and farmers," said Colin A. Carter, Distinguished Professor in the Department of Agricultural and Resource Economics at UC Davis and co-author of the “Containergeddon” report.

While no sector is immune to the current supply chain woes, California’s most valuable crop—almonds—is especially feeling the pain. That’s because about 70 percent of California almonds are destined for export markets. Blue Diamond Growers CEO Mark Jansen told West Coast Nut that the company’s average shipping order over the past 18 months has been booked three separate times due to last-minute cancellations.

A recent survey by the Agriculture Transportation Coalition (AgTC) found that 22% of U.S. agriculture foreign sales could not be completed due to booking requests that were declined, exorbitant freight rates, and other ocean carrier practices. During May to September 2021, UC Davis researchers calculated that California tree nut producers lost the most—about $520 million in foreign sales—followed by wine ($250 million), and rice ($120 million). The average trade decline was most pronounced for processed tomatoes (down 44 percent), followed by rice (down 34 percent), wine (down 26 percent), and tree nuts (down 17 percent).

While agricultural exports nationwide have trended upward, California’s have dropped, as the state loses export market share to East Coast ports. It’s a problem that isn’t expected to go away anytime soon.

“I anticipate that agriculture shipping in 2022 will follow the same trends as 2021, if not worse. The supply chain crisis is now a community tax revenue crisis and an on-farm cash flow crisis, as sold cargo is only paid upon delivery,” said Aubrey Bettencourt, President and CEO of the Almond Alliance.

In search of solutions

Almond growers and other stakeholders proposed short- and long-term federal solutions to shipping issues, including temporarily increasing the hours of operation at some ports, establishing a cap on the number of empty containers leaving ports, and expanding and modernizing communication systems.

The administration has acknowledged the crisis at the ports. In October 2021, President Biden announced a push for the ports of Los Angeles and Long Beach to operate 24/7 by adding new off-peak night time shifts and weekend hours. In December 2021, Secretary of Agriculture Tom Vilsack and Secretary of Transportation Pete Buttigieg urged ocean carriers to help mitigate disruptions to agricultural shippers.

In January 2022, the U.S. Department of Agriculture announced a partnership with the Port of Oakland to set up a new 25-acre “pop-up” site that will make it easier to fill empty shipping containers with agricultural commodities. If successful, USDA could expand this pilot project to other ports. In February 2022, the U.S. Department of Transportation released nearly $450 million in new grant funding aimed at reducing bottlenecks at the ports. The issue has been debated on Capitol Hill, as well. In December 2021, the U.S. House of Representatives approved the Ocean Shipping Reform Act, legislation aimed at stopping ocean carrier companies from refusing to load U.S. agricultural and other goods for export. A similar bill has been introduced in the Senate but has not yet received a vote. The Agriculture Transportation Coalition continues to advocate for its passage.

How growers can stay engaged

A perfect storm of factors has led to the current port crisis and it will take a multifaceted approach to solve it. The Agriculture Transportation Coalition outlined 64 solutions that would provide short- and long-term benefits to the supply chain. Some of these ideas could be implemented immediately while others would take years. The Almond Alliance also shared a list of priorities specific to almond growers.

California state legislators have also continued a dialogue about potential solutions. California Governor Gavin Newsom’s 2022-23 budget proposes $1.4 billion in funding focused on the supply chain and port infrastructure. Several bills have been introduced, including AB 1678, which would establish a Blue Ribbon Commission on Port Congestion and Supply Chain Deficiencies at the California Department of Food and Agriculture.

What is the most important thing that growers can contribute right now to help address gridlock at the ports? Communication.

“As growers, we know that this is a real-life crisis. But this is not receiving the attention it deserves. Like a lot of things in farming, we are going to have to solve this for ourselves, it seems. Let's start by making sure decision makers know this is a problem, offer real-life examples, and be engaged and vocal in the development of solutions in the private sector and public forums,” Bettencourt said.