As the Food Safety Modernization Act, or FSMA, is rolled out, growers have new safety standards that they need to keep an eye on, especially when it comes to water.

Pistachio growers don’t need to wonder about what it will take to comply though--at a recent meeting of growers, University of California professor Linda Harris went through the new rules in plain language.

“You’ve got to ask yourself, in my system, ‘What water am I using that is contacting those pistachio clusters?’” she said.

The FDA defines production water as water that is used in contact with produce as it is grown, for irrigation, fertigation, frost protection, or foliar sprays.

Postharvest water is defined as water used during or after harvest. 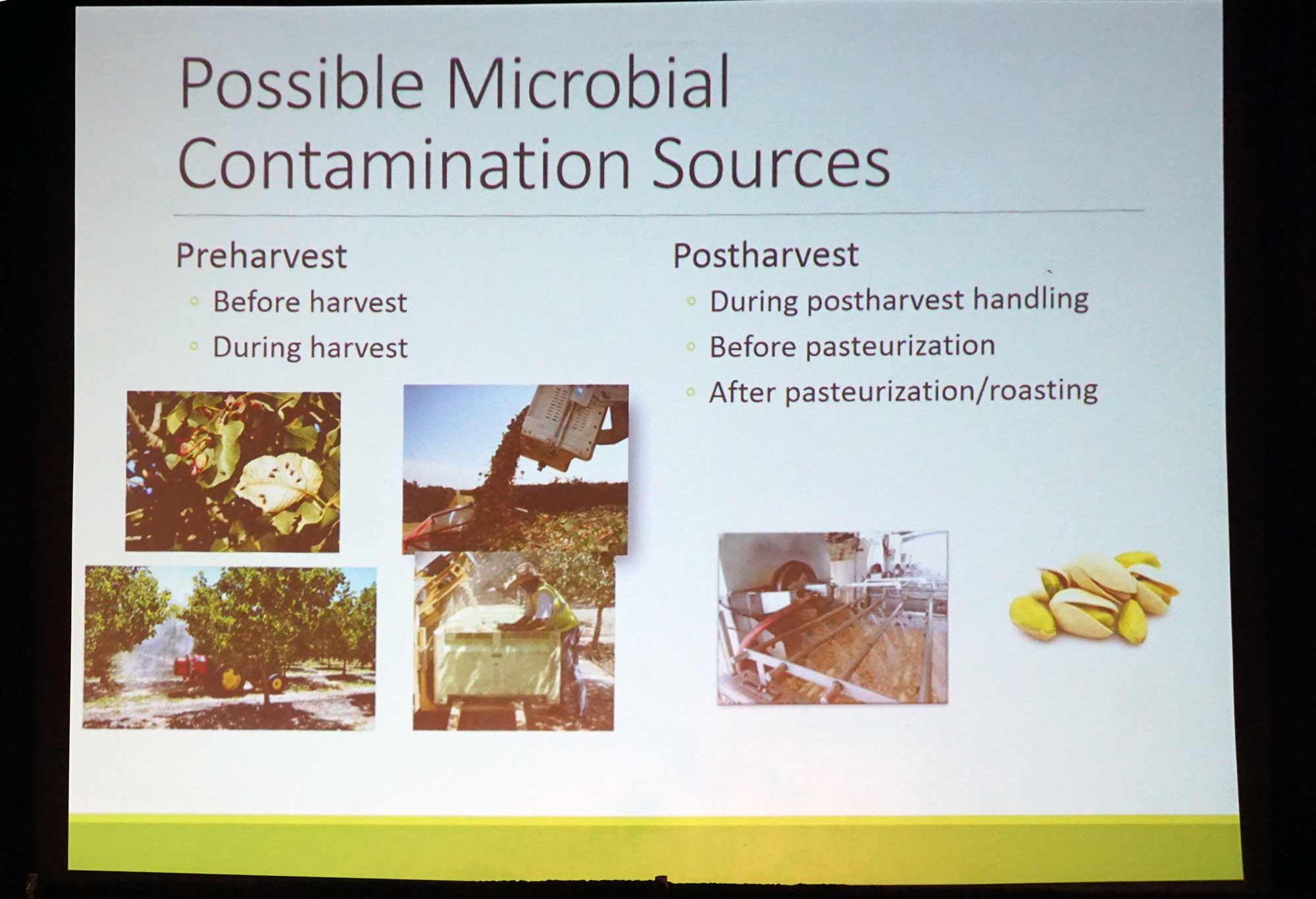 “Most pistachio growers use some kind of drip irrigation or micro-irrigation, and as long as that is working as intended, it is not contacting the harvestable portion of the crop,” Harris said.

Exceptions to that guidance include if animals chew it, the systems could spray. Harris said it would be better if that was not happening the day an inspector is there. Likewise, dust abatement water can probably be controlled--managed so water isn't going up into the tree.What growers are left with that they must consider, Harris said, is foliar sprays.

“What are you applying to the crop in August or July? That's the area of time we're focused on,” she said.”How can growers make complying with the water regulations easier? Simplicity of fewer sources to worry about, Harris said.

“It will benefit you to reduce the number of sources of water you're using that meet the definition of agricultural water,” she told growers. 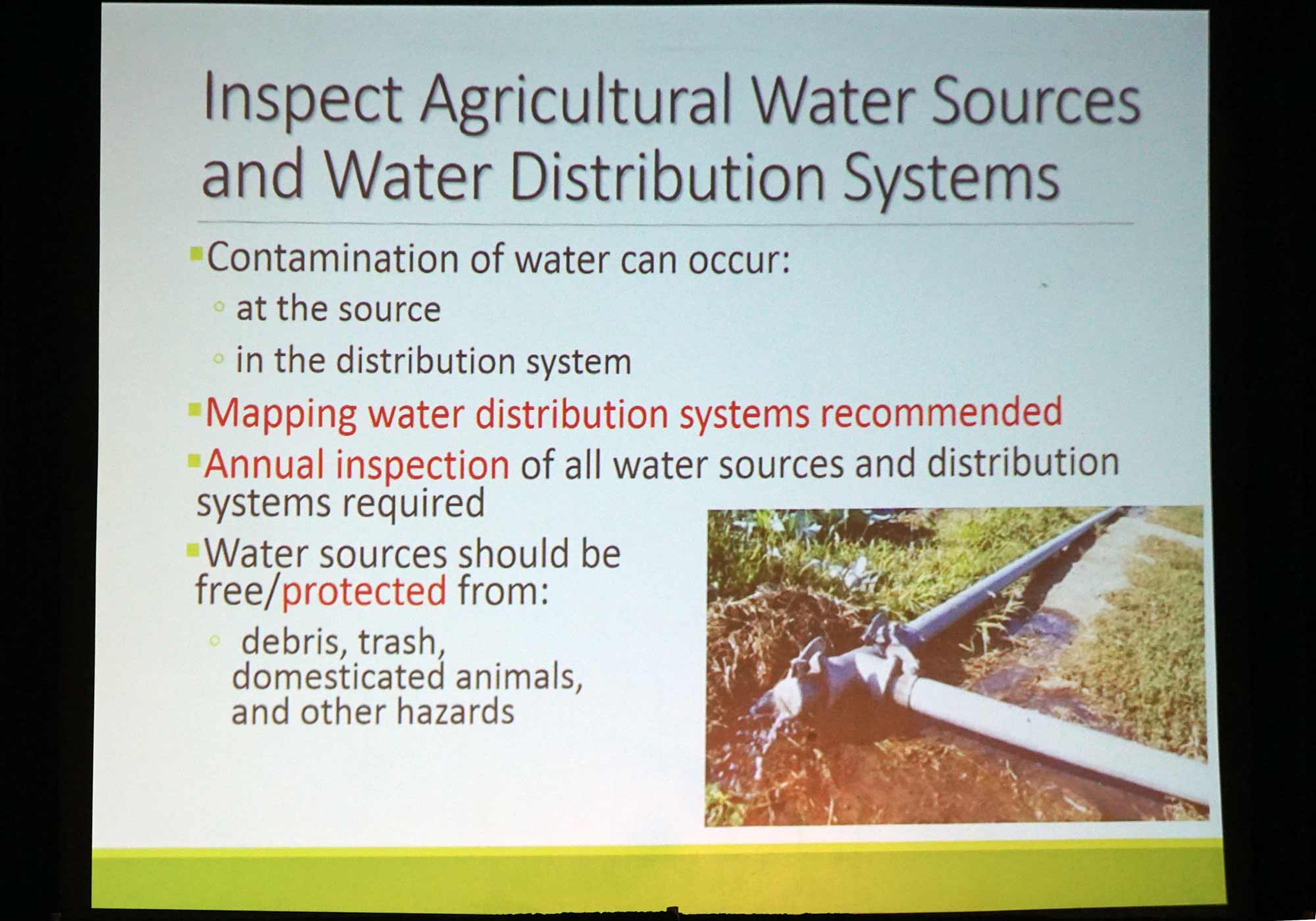 “The rule says that you have to look at your overall supply of water on your farm,” Harris said. “If you don't already have a map of your farm and all the sources of water, that is highly recommended.”

It’s beneficial to growers to map water sources because it makes it easier to communicate with auditors and inspectors.

It also helps growers to track their inspection efforts and have the results on file, so they get credit for them.“When you do an annual inspection, that's when record-keeping comes into play. If you didn't record it, the inspection didn't happen,” Harris said.

Growers must test water for microbial presence, for species like E. Coli, an infamous microbe used for testing standards because it is a bellwether for fecal coliform bacteria that can sicken people.

“Generic E. Coli is considered as good of a test as we have to evaluate fecal contamination,” she said.

If growers are using a public water source for agricultural water, all they need to do is have the municipality's test results on file, she said.If you are using a groundwater source and not pumping into a reservoir, growers must take 4 samples during growing season or over a year on the first year, then annually add one sample and calculate a new rolling mean, dropping the oldest number, she said.

The sample should be taken as soon before harvest as possible.

“Now if you move into a surface water source, that's where things get a little more intense,” Harris said. “You have to sample 20 or more times over a period of 2 to 4 years.”

“You can't do it in one year. You cannot wait until this thing is in place for you to suddenly remember that you have to do sampling, or if you change your mind on where you're going to get your water.”

After growers do the initial 20 samples, they must do five samples every year, and the oldest five sample readings drop off the averaging calculation. Harris said the formula is a rolling mean, five on every year, five off every year.

“You do have to think long-term and strategically. What I think and what I hope is growers will not have to test every water source on their farm,” Harris said. “Even if you have to tweak a little bit of your practices, there's going to be a rational way to get a handle on it and do it in a manageable way.”