Are your vines sick, or just thirsty? Consider lab testing to be sure. 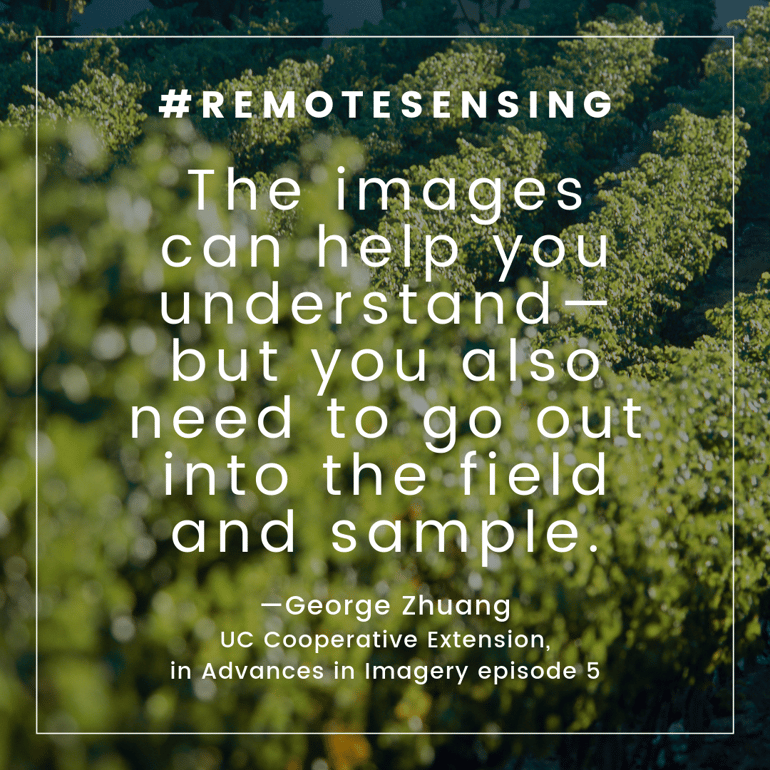 On episode four of Advances in Imagery we discussed the latest in pest and disease management for orchards. In episode five, we took the conversation to the vineyard—with research insights from University of California Cooperative Extension viticulture advisor George Zhuang.

Episode 5: New Data vs. Pests and Disease for Vines

Zhuang, who works out of Davis and Fresno, is currently researching the optimum water deficit and timing of mechanical leafing on cabernet sauvignon grapes. "The hope is to get the best color of Cabernet Sauvignon grown down here in the San Joaquin Valley," he says. "Historically this area is pretty hot for Cabernet Sauvignon, so if you don’t manage the water or do any canopy management the color is pretty poor for these varieties.” 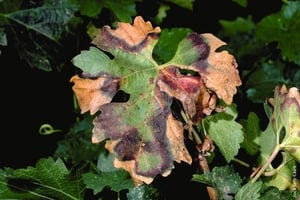 Which brings us to a particular challenge of managing pest and disease in vines: flare-ups and water stress can sometimes look the same. Even Zhuang, early in his career,  once mistook water stress of vines for Pierce disease. "Sometimes the symptoms of the vines can be really confusing and you really need lab tests to confirm.” For this reason, Zhuang often recommends lab-testing samples to be fully confident in an action plan.

Can remote sensing help? It's certainly a time-saver: Zhuang says imagery allows him to prioritize where to spend time in the field rather than walking or driving all 20 of his research acres in search of anomalies. And scientists like Zhuang's colleague Dr. Monica Cooper have shown promising results correlating hyperspectral imagery and viruses. "Still, you need a lot of data and ground-truthing to confirm the wavelengths or the band that is correlated to the disease," Zhuang cautions.

We also discussed the growing concern among viticulturists about fungicide resistance, and researchers' efforts to evaluate the extent of the problem by collecting samples from across the country. Regardless of the findings, Zhuang thinks imagery may have a role to play as fungicide strategies evolve. “Previously we sprayed fungicide or insecticide on the whole field, regardless of the variation of the population of fungus or insects. That sometimes can be less efficient and very expensive ... [but now we] can use imagery to find hot spots in the field and do a differential spray just along that hot spot.”

Advances in Imagery is our new audio series produced in partnership with Malcolm Media. If you've already listened in,  check your email for a link to a short quiz that will earn you PCA or CCA credit. Most importantly: we want your feedback! Is there a topic you're interested in covering in future episodes, or someone you'd like to hear on the air as our next guest? Leave us a comment and let us know.

Missed the debut episodes of Advances in Imagery? Catch up here.