Conventional wisdom suggests the best irrigation strategy for walnuts is "early and often." But if you've been taking that approach—or even basing decisions on local evapotranspiration reports—you might want to reconsider. Current research suggests that properly managed deficit irrigation might actually benefit yields, long-term orchard health, and your bottom line.

Since 2014, researchers at the University of California—Davis Department of Plant Sciences have been investigating a hunch. For years, UC Cooperative Extension specialist Bruce Lampinen had been fielding mid-summer farm calls for walnut trees that showed signs of strange mineral excesses or deficiencies. Lampinen had begun to suspect that the problem wasn’t nutrition. The trees, he suspected, were too wet.

Lampinen and a team of researchers began testing the theory, bringing portable pressure chambers (also called pressure bombs) into several commercial orchards in Northern California. Analogous to a blood pressure cuff, the device measures water pressure in a leaf to show how hard a tree is working to pull moisture from soil to stem.

Using daily pressure measurements, the team experimented with delaying early-season irrigation until the trees crossed various stress thresholds. They soon realized they were on to something important.

Ken Shackel of UC Davis demonstrates use of a pressure chamber.

By delaying the first irrigation of the season—by weeks or even months behind other local farmers—the test orchards “not only did not have negative effects, but the trees actually looked better,” says Ken Shackel, one of the lead researchers and a professor at UC Davis.

In stress-sensitive walnuts, this finding was counterintuitive—but it reinforced a perspective Shackel had developed over the course of his career. Most farmers use the appearance of the soil and the state of the atmosphere to guide whether and when to irrigate. But Shackel suggests instead, “let’s ask the tree.”

In the years since that first test, Shackel’s team has demonstrated that by delaying irrigation, walnut trees are forced to use existing moisture, which encourages their roots to grow deeper. Waiting until a tree is in “moderate” stress (2 to 4 bars below a fully irrigated baseline pressure measurement), the team found they were able to reduce annual water application by 40 to 60 percent, depending on the site. Shackel says this reduction also means less weed pressure, and may reduce pests, too.

While the initial research showed neither positive nor negative impacts on the harvest, Shackel says that over the five years since, he’s become convinced that in the long term, deficit irrigation early in the season and mid-summer in fact increases annual yields. He hopes that his ongoing research will prove it.

“This may just be the tip of the iceberg for water management to get the beneficial effects of stress,” Shackel says. 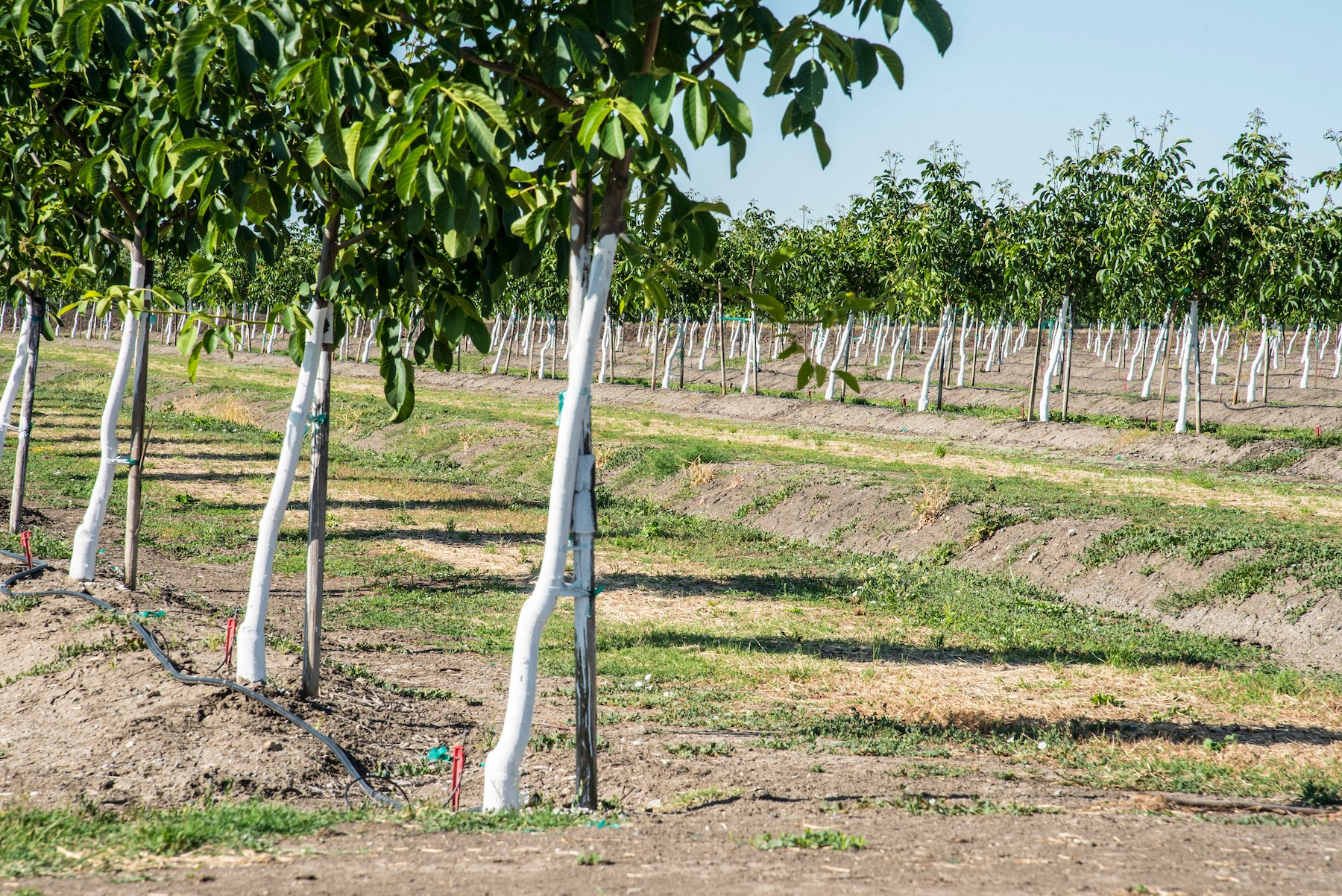 For growers who want a view of water stress over the entirety of an orchard, Ceres Imaging provides a proven alternative to pressure chamber testing.

Practically speaking, this kind of management will require growers to adopt a new mindset—one more like that of a doctor tracking a patient's vital signs. It will also require that growers invest in the labor and technology necessary to take measurements. But Shackel says other researchers have shown that daily monitoring of even one tree per irrigation block pays off over the course of the season.

Demonstrating with a leaf inside the small chamber of his pressure bomb, Shackel lifts the pump bar to shoulder-height, then presses down, pumping it several times. His eyes are on the end of the clean-cut stem, which is magnified in a small viewfinder at the top of the pump. “It’s usually pretty obvious when you start to see water come out,” he says, still pumping. “It doesn’t take a lot of training to—ah, there it is!” Water bubbles from the stem.

As growers in California continue to reckon with water scarcity and drought conditions, Shackel believes that this method of “asking the trees” and tracking daily measurements will become the only reliable way to manage irrigation. “Going forward,” he says, “probably all crops are going to need some kind of plant-based indication of stress in order to justify—and optimize—irrigation.”

It's been a wet winter—and spring: have you adjusted your irrigation program?

Post-harvest irrigation in tree nuts: get the water on