How the industry and the law cracked down on nut theft

David Phippen didn’t used to think twice about leaving his almonds on wheels overnight. In a typical three-month harvest, his company, Travaille & Phippen, grows, handles, and processes 36 million pounds of nuts at their Manteca, California, facility. If the occasional trucker didn’t show up as scheduled to pick up a load, Phippen’s crew could save precious time by leaving the container loaded up on a trailer chassis, so it was ready to roll first thing in the morning.

But that changed one night in 2014. “Someone broke into our facility, hot-wired our trucks, hooked up to two live loads, and took them away,” Phippen says. The thieves proceeded to a truck stop a few miles down the road, where they ditched the hot-wired trucks and hooked the stolen trailers, carrying 88,000 pounds of almonds, to their own rigs. “And then off they went,” says Phippen.

That’s how Travaille & Phippen got caught up in a rising tide of nut thefts that swept through the California’s Central Valley in the mid-2010s. In response, growers and processors like Phippen have worked closely with trade groups and law enforcement agencies to implement new security protocols up and down the supply chain. And while the industry still suffers the occasional theft, experts say that as growers and processors have taken steps to protect themselves and their business partners, the prevalence of these crimes has plummeted.

The lure of black-market nuts

California has long been a hotbed for cargo theft of all kinds, recently accounting for about a fifth of the nation’s total incidents, according to one report. But it wasn’t until nut prices really started climbing that thieves began to regularly target growers and processors.

“Used to be when people wanted to steal a trailer load, they’d steal batteries, tires, or a truck full of computers,” says Roger Isom. He's president of the Western Agricultural Processors Association, a trade group representing 173 nut processors in California. But by 2015, when almonds were going for more than four dollars per pound and a truckload of pistachios could fetch nearly half a million dollars on the black market, stealing nuts “became very attractive." 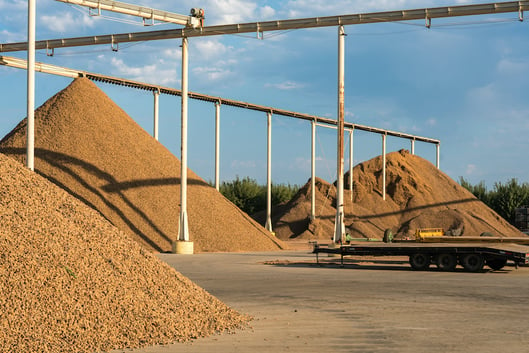 Why nuts? They're more shelf-stable and easier to store, repackage, and transport than many other agricultural products. And unlike a laptop, you can’t put a serial number on a nut—making the stolen product almost impossible to trace. The Washington Post reported that between 2014 and 2017, theft cost the industry $7.6 million.

At the time, the supply chain was riddled with security gaps, and thieves seemed to find a way to exploit every one of them, says San Joaquin County Sherriff’s Deputy Don Stuhmer, head of the California Rural Crime Prevention Task Force. Some jobs were the work of what Stuhmer calls “local knuckleheads” who’d walk onto a grower’s field at night and help themselves to a few buckets’ worth of nuts straight from the tree, or fill their pickup bed from an unguarded load of recently harvested nuts left close to the side of the road. Other growers, like Phippen, saw their facilities broken into or their equipment hijacked.

As the industry plugged the bigger holes, thieves found their way in through smaller cracks—or in some cases, created new ones. They forged documents, creating sham paperwork with a known trucking company’s information but a different driver. Stuhmer describes the “sophisticated” work of a crime syndicate that hacked into trucking company computer systems, gaining access to information about pickup times and routes. “That ended up being the Armenian mafia. They were running stolen loads down to the Port of Long Beach and shipping them out to Eastern Europe,” he says. Some thefts are inside jobs: This June, Tulare County deputies booked the proprietor of a trucking company in Tulare County on suspicion of diverting 22 tons of pistachios from the Touchstone Pistachio Company.

The Sacramento County Sheriff’s Office eventually apprehended the thief who made off with two loads of Phippen’s almonds, and the culprits paid to cover the insurance deductible. But Phippen says he learned his lesson about leaving an attractive nuisance for potential thieves. “During harvest season, I, me, David Phippen, sit here personally every day until every last load goes in. If for any reason a load is on wheels, and for some reason it doesn’t go that day, we unload it and get it back in the warehouse,” he says. “We have shit conniptions about leaving a load out overnight for a bad guy.”

Now, processors connect with trucking company dispatchers when they call to order a pickup and confirm the driver’s identity, schedule, and specific truck ahead of time. When the driver arrives, processors take pictures of the truck, license plate, and VIN, and then bring the driver inside to take pictures—even fingerprints.

“Once you start taking pictures, if that driver’s not legit, he’ll get spooked pretty quickly and just drive off,” Isom says. And if any of the details don’t match the plan from the trucking company, he says, “it’s a red flag—you need to pick up the phone and call your trucking company.” Some growers and processors also equip trailers with GPS devices and use GIS technology to mark a “geofence” around the designated route, which raises an alarm the moment a truck deviates from its planned course.

Altogether, these measures have thwarted most would-be heists in recent years, though law enforcement does respond to a few reports of nut theft every harvest season. “I don’t know of anyone in the industry who hasn’t tightened up their procedures, but you get staff turnover or guys get lax,” says Phippen. “If it’s happening to you now, it’s shame on you.”

“The biggest thing is, don’t get complacent,” Isom agrees. “The new protocols add up to a lot more work, but you lose a load worth half a million dollars and suddenly it doesn’t seem like that much work.”

Missed the debut episodes of Advances in Imagery? Catch up here.

It's been a wet winter—and spring: have you adjusted your irrigation program?

New for 2021: analyze your orchard at the plant level