Research finds pistachio growers should be wary of dust in bloom

In 2016, five years into one of the worst droughts ever measured in California, farm advisors, growers, and much of the public focused their concerns on water. From her lab at U.C. Davis, Dr. Lu Zhang and a team of researchers wondered instead about another factor suddenly in abundance: dust.

From their research comes a strong recommendation for pistachio growers across the West: Do not flail-mow or operate dust-generating machinery during bloom. Dust in orchards hurts pollination, they found, and chemicals likely mixed in with that dust do worse.

As growers look ahead to the coming season—coming out of another dry winter with below-average snow-pack—Zhang’s findings are worth keeping in mind. 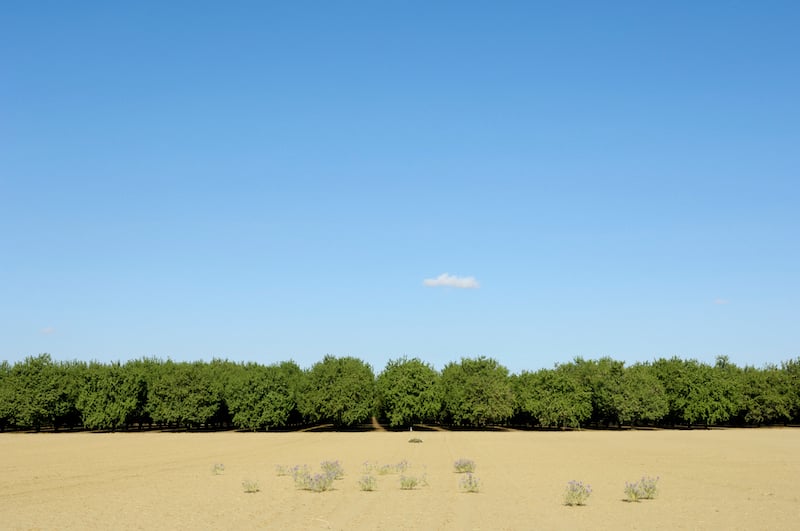 Zhang, now a professor of horticulture at Oklahoma State University, is an expert on nut and cherry flowers. When she saw photos of orchards the spring of 2016, she had no doubt about what she was seeing: Dust, turned up by flail mowing, machinery, and wind, was covering the trees. For pistachios in particular, this spelled trouble.

Taller trees like pecans might avoid some of what that machinery and wind kicks up, she says, “but pistachios, at just two or three meters high, could be totally covered by dust.” Specifically, she worried about the flowers: pistachio blooms don’t have petals to protect their most vital organs.

That year and into 2017, Zhang’s team set out to answer three related questions: Does dust reduce pollination and fruit set in pistachios? Does it influence nut growth and shell splitting? And what if all that dust was laced with herbicide residues from the areas surrounding the trees—could this harm the flowers, too?

It didn’t take long to get the answers Zhang suspected. The first season, her team covered female blooms with plastic bags and hand-pollinated with dust, pollen, and a half-and-half mix. The second year, they repeated the procedure, this time with various ratios of dust to pollen, plus a dust-pollen mixture contaminated with two common herbicides (GlyStar Plus and Treevix, based on label-recommended concentrations). 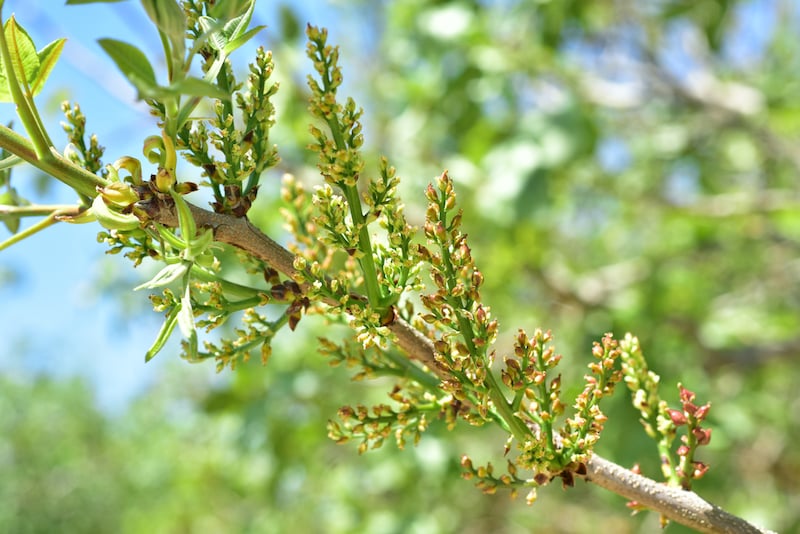 Every dust-pollen mixture led to lower fruit set and nut yield. In the dustiest samples (16 parts dust to one part pollen), blanking was as high as 80 percent, compared to 11 percent with pure pollen. A closer look at the flowers themselves suggested that dust blocked the interface on the flower stigma that receives the pollen, which prevented fertilization. It also seemed to fool the flower into thinking it had been pollenated, stimulating “parthenocarpy,” which results in empty shells. While parthenocarpy is great for fruit like grapes, Zhang says, in which a seedless fruit is desired, “for the pistachios, without the seeds, that means you have nothing.”

The biggest surprise of the project came when Zhang examined herbicide-treated flowers under a scanning electron microscope and realized that the herbicide had damaged the very structure of the flower’s stigma. Papilla cells—the ones that receive pollen—had disappeared. This means that herbicide residue, from pre-emergent chemicals applied shortly before the bloom or even residues from years past—“could cause very severe damage to the flowers,” Zhang says.

Further research is needed to show what dust-to-pollen ratios actually exist in the field, as well how much herbicide is truly present, but until then, the simple takeaway for pistachio growers is to avoid flail-mowing during the bloom, and, if possible, to apply herbicides after the bloom.

University of California Farm Advisor Robert Beede says he doesn’t typically recommend mowing during the bloom anyway, due to the associated release of plant-damaging insects, but his colleagues say larger operations may fear taking a break in weed management since the effort to catch up later can be significant. Dr. Richard Hareema, a pecan and pistachio specialist at New Mexico State University, recommends that for larger orchards in which regular mowing is a necessity, a combination of irrigation management and carefully applied pre-emergent herbicides earlier in the season can “make it less problematic to take a brief break” from managing the orchard floor during the bloom. Discing can be another dust-minimizing option.

Focusing on irrigation to limit premature fruit drop in citrus